Classification and Characteristics of Taps

The difference between extrusion taps and cutting is that there is no cutting discharge when tapping, and the processing surface of the internal thread is pressed and has a beautiful appearance. Smooth. The material wire is not cut continuously, and the thread strength is increased by about 30%, and the accuracy is Stable, due to the large diameter of the core of the extrusion tap, the endurance and torque strength are large, and the tap has a long life and is not easy to break. Suitable for materials with high ductility. Iron plate, copper plate, aluminum plate, stainless steel plate and pipe processing. However, the requirements for the bottom hole of the extrusion tap are higher: too large, and the amount of base metal is small, resulting in too large diameter of the internal thread and insufficient strength. If it is too small, the enclosed and extruded metal has nowhere to go, causing the tap to break. The calculation formula is: bottom hole diameter = internal thread nominal diameter-0.5 pitch.

Screw Thread Insert Taps are effective for tapping in blind holes and cutting continuously discharged steel materials. Because about 35° of right-handed volute cutting can be discharged from the inside of the hole, the cutting speed can be 30%-50% faster than that of a straight groove tap. The high-speed tapping effect of blind holes is good because the cutting is smooth. It has poor effect on materials that are cut into fine pieces such as cast iron. 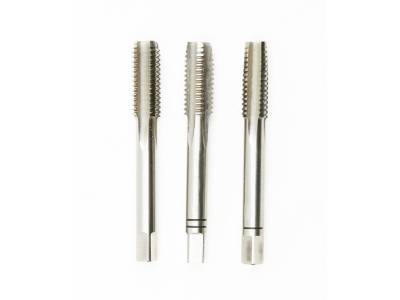 Straight flute tap: it has the strongest versatility, through-hole or non-through-hole, non-ferrous or ferrous metal can be processed, and the price is the cheapest. But it is also poorly targeted, and everything can be done, but nothing is done best. The cutting cone can have 2, 4, and 6 teeth. The short cone is used for non-through holes, and the long cone is used for through holes. As long as the bottom hole is deep enough, the cutting cone should be as long as possible, so that there are more teeth sharing the cutting load and the service life is longer.

The tip tap has a special gun barrel groove design at the front edge groove, so it is easy to cut, and the torque is small and the accuracy is stable, which improves the durability of the tap. When the thread is processed, the chip is discharged forward, and its core size is designed Larger, better strength, and can withstand greater cutting force. The effect of processing non-ferrous metals, stainless steel, and ferrous metals is very good, and the through-hole thread should preferentially use the tip tap.

The straight groove shape of Hand Taps is generally widely used and the most common. JIS stipulates that there are 1#(9山)2#(5山)3#(1.5山) food payment length, 3 pieces combined into a group, and the work efficiency rate increases. Single tapping can be used. We offer a wide range of high quality taps.